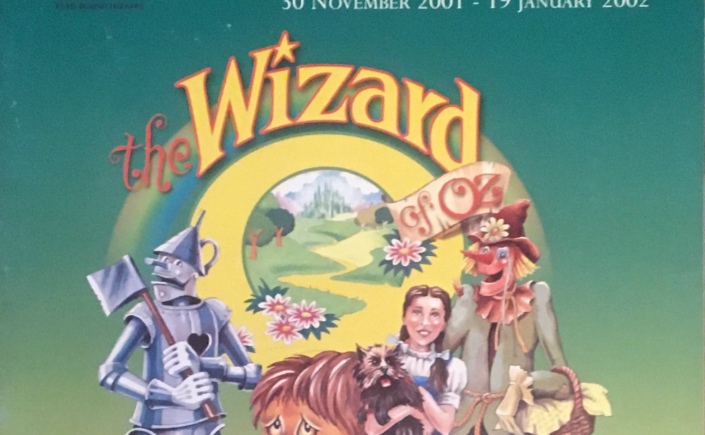 The 8th in my series of GHOSTS OF CHRISTMAS PAST takes us back to Christmas 2001 at Theatre by the Lake, Keswick, and THE WIZARD OF OZ.

This was my very first show at Theatre by the Lake, and my first time as part of the fabulous creative team of Ian Forrest, Martin Johns and Lorelei Lynn.

> Getting to work at Theatre by the Lake – a venue that I’d heard so many people saying good things about, and they were proved to be right!

> Having a blast all Christmas in an Orchestra pit with two marvellous chaps – Gareth Ellis (Keyboards) and David Gay (Drums & Percussion).

> The amazing “El Glocko”! This was the nickname given to our marvellous drummer, David Gay. David is a fine kit drummer, but wasn’t really used to having to play tuned percussion. Glinda’s entry music called for a repeated pattern played on the glockenspiel, which David found a challenge. Myself and Gareth Ellis always had difficulty not finding David’s errors amusing – and this got worse every time David tried a new approach. He first came up with a colour coding system – which didn’t help. He finally decided to remove all the keys of the glockenspiel that he didn’t need – only to then loudly hit one of the gaps where a key should have been. Needless to say, Gareth and I kept superbly straight faces (🙈), and David acquired his “El Glocko” nickname from then on.

> Reading the show reports! With such a technically challenging show – breaking all the rules of “never work with children and animals” – and a collection of wonderfully “twinkly-eyed” actors and musicians – the show report always had something of interest to read. Here’s one particularly event filled example…

> Pro-celebrity percussionists. As MD, I had a nice cut-away in the stage, so I was visible to the cast, and they to me. Our other 2 musicians were pretty much hidden under the stage though. We had a rule that if you named the band for a performance, and made a poster for the pit door – you were allowed to come and play some extra percussion during the “Scary Forest” underscore music. This meant that I would sometimes look down and see A Tinman or Wicked Witch gleefully playing a triangle or the like! At the start of the run our DSM, Jo Jones, would read the name of the band out as part of the backstage calls (Stand by Gentlemen of “MystAque” etc..). This led to people trying to read out names including double (or often single) entendres without realising. I think the final straw was “Strawberry Love Truncheon”, after which Jo refused to read any more out!

“Will we ever get back to Kansas?”

The Wizard of Oz was the most technically demanding show that Theatre by the Lake had so far staged – with big scene changes, and a vast amount of costumes and changes. This meant that the tech rehearsals took much longer than anticipated. As well as needing to be ready for the opening night – the Theatre also had an invited audience lined up for the dress rehearsal – comprising of friends of the Theatre, the Volunteers who would be working front of house for the run, and local business owners, including the many B&Bs who would hopefully be sending customers in the direction of the Theatre. The tech however was not finished in time for the dress – so it was decided that rather than cancel the open dress, we would run the show as far as we had tech-ed, then continue the tech afterwards until it was all done ready for opening the next day. There was a speech to the audience before-hand to explain, and they were told they could stay on and watch some of the tech process if they wished. We got to midnight, and still hadn’t got out of Oz – so I had to let the rest of the band go, to save paying the expensive overtime. At this point, we still had some hardy audience members watching! If memory serves it was about 2am before we eventually got to the final curtain – the longest tech I think I have ever been involved with.

Anecdotes best told by someone else (or maybe best forgotten):

> The Emerald City Guard (Morgan George) managing to corpse the entire company with a misplaced lyric.

> The sacking of Toto (One of our Totos refused to walk on the shiny stage, malted fur making Dorothy Gag, and howled all through “Somewhere over the rainbow”!)

> Many tales from the nightclubs of Keswick (There were actually 2 open at that time!)

This was a truly happy time in my career – and led to working on many shows with many wonderful people at Theatre by the Lake over the next 18 years. It’s very sad to know that the Theatre, like many many others, remains dark this Christmas. Here’s hoping that the magic can return for Christmas 2021.

This is a very difficult time for those working in the Entertainment Industry, and for theatres, so if you are in a position where you can help out in any way, here are the links to the MU and Equity hardship funds, and to the Theatre by the Lake fundraising page: