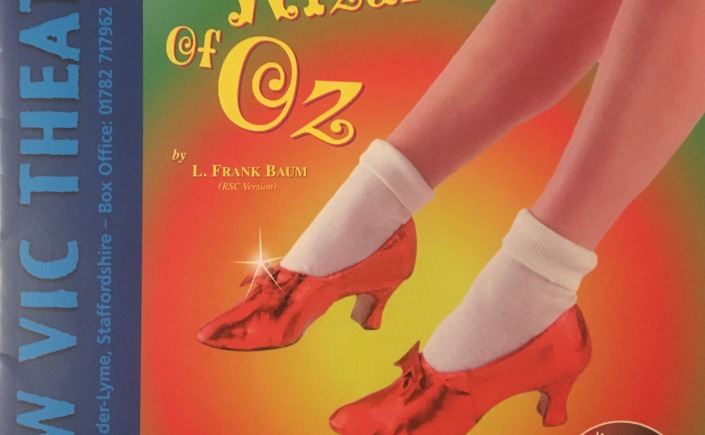 Time for the third in the series of GHOSTS OF CHRISTMAS PAST. This time it’s the turn of THE WIZARD OF OZ at the New Vic Theatre in Newcastle-under-Lyme – Christmas 1999.

This was the first show for which I was Musical Director at the New Vic – although I had already worked there twice before, as Assistant MD to the incredible Bruce O’Neill, on Chris Monks’s adaptations of CARMEN and THE MAGIC FLUTE.

> Getting to be Musical Director of a show at the New Vic. For those who don’t know it, The New Vic is Europe’s first purpose built Theatre in the Round – built thanks to the passion, dedication and determination of Peter Cheeseman, realising the vision of the company’s founder, Stephen Joseph. It’s a fantastic space in which to make and watch theatre.

> Making a nightly appearance as “The Voice of Juliet” in the Tin Man’s “If I only had a heart” song – and here’s the evidence!…….

> Working with the inimitable Craig Vear on Drums & Percussion. Everyone knows the film of THE WIZARD OF OZ, and is familiar with the sound of the enormous MGM Orchestra and Choir. With the resources, venue size, and budget of the New Vic, we were never going to achieve the same sound, so I had to find a different, magical approach to presenting the music. Having worked with Craig on several occasions before, I knew how wonderfully creative he could be, so we performed the whole score with just an upright piano, and Craig’s vast collection of percussion instruments (Plus a banjo solo from our Scarecrew – Robin Pirongs, and some dazzling trumpet from our Wizard / Professor Marvel – Oliver Beamish). We had a great time doing it, and I’m pretty sure the audiences appreciated our efforts!

> Being a part of the “New Vic Family” at Christmas. The New Vic is one of those venues where everyone in the building is completely invested in the shows that they produce – from the Production Team, through the Technical Staff, Stage Management, Wardrobe and Workshop staff, Theatre staff, Catering staff, Volunteers, and indeed their audiences. It’s a Community in itself, but also an integral part of the local Community.

> Pro/Celebrity Munchkins. Our MUNCHKINLAND was populated with our young company, and available members of our adult cast, which already made for some very tall Munchkins. Many of our young cast travelled a fair distance to be in the show every day, and winter illnesses often meant we were down a Munchkin or two. When we were particularly short(!) – the adult cast had to step in to cover lines of song and dialogue. This meant some truly memorable versions of “The Lollipop Guild” and the “Lullaby League”.

The day our Director went on as the WICKED WITCH OF THE WEST.

With most shows staged by Theatres the size of the New Vic, there is no budget for understudies, so if people are ill, or injured they either “soldier on”, or alternatives have to be found, and quickly.

During the Christmas week, our Cowardly Lion (Craig Parkinson) came down with food poisoning. He managed to get through the first show of the day, with buckets strategically placed at each of the entrances to the stage (In theatre in the round, appropriately known as Voms!) – but soon after, if memory serves correctly, he was taken to hospital and put on a drip due to dehydration. Sadly, the evening show was cancelled, but with 2 sold out shows the next day, a solution was needed quickly.

As luck would have it, the actor playing our Wicked Witch of the West (Angie Bain) had played the lion in a recent production of OZ at the Bolton Octagon. She somewhat miraculously managed to re-learn the part of the Lion, including much of the choreography (by the wonderful Bev Edmunds) overnight. Craig being about 6’4in, and Angie being about 5′ meant a lot of work for the wardrobe dept to make the costumes fit, but they did it, and the required theatrical miracles were worked. Keeping a straight face was a little tricky for the rest of the cast though, having been faced up to that point by a tall, rather louche version of the lion, were now faced with a kind of Danny Devito-esque whirlwind.

All of that though left a large gap in the casting – who would play THE WICKED WITCH OF THE WEST?

Step forward our Director – Gwenda Hughes, who reluctantly agreed to go on, script in hand, to make sure that the show would go on. Everyone pulled together to help Gwenda get through – which of course she did with aplomb – including disappearing down the fast trap when the Witch gets “melted” – although I suspect very little acting was required for the look of terror on her face as she did so.

The magic of the theatre was clearly rubbing off on Gwenda by the second performance – as she even managed to respond to the audience Boos (at her character!) with the withering ad lib “I don’t have to do this you know – I’M MANAGEMENT!”

In hindsight, it was perhaps a little tasteless to have a “Help put the colour back in the lion’s cheeks” page in the free activity pack in the programme, but perhaps Professor Marvel’s crystal ball was broken when they did that design! (I coloured mine in green BTW 🤪)

Anecdotes best told by someone else (or maybe best forgotten):

> Toto farting in the poppy fields

Needless to say, I have incredibly fond memories of this show, and I remain good friends with many of those involved.

Please feel free to add your own memories of the show below, or on the posts on Facebook and Twitter.

This is a very difficult time for those working in the Entertainment Industry, and for theatres, so if you are in a position where you can help out in any way, here are the links to the MU and Equity hardship funds, and to the New Vic’s support page:

One thought on “GHOSTS OF CHRISTMAS PAST – 3. The Wizard of OZ (New Vic)”

This site uses Akismet to reduce spam. Learn how your comment data is processed.